Counsel for intervenor has submitted his written arguments before the pronouncement of judgment.

Action sought against Sr. Counsel Amit Desai for misleading the Court with overruled, per incuriam judgments and wrong facts with twisting and concealment of the relevant ones. 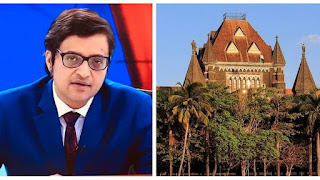 Few excerpts from the written arguments by Adv. Nilesh Ojha, the Counsel for intervenor;

1.   the  following factual and legal position is ex facie clear;

(i)           The investigation of the present case was completed two years back and report is submitted in the court and it was accepted by the Court of Judicial Magistrate.

(ii)         Thereafter when Mr. Arnab Goswami started attacking state government in his news channel then the Home Minister Mr. Anil Deshmukh passed the order of ‘reinvestigation’ of the said closed case. Which is against the mandate of the law laid down by the three Judge Bench of the Supreme Court in the case of  Vinubhai Haribhai Malaviya and Others v. State of Gujarat and Another 2019 SCC Online 1346 at para 40.1 [Pg. No. 141 of the compilation submitted by Sr. Adv. Mr. Abad Ponda ]

In a similar case in the matter between Sri Balaji v. The State of Karnataka & Others 2008 SCC On Line Kar , the case similar to that of Arnab Goswami was held to be vitiated and it was quashed for initiating the proceedings by doing ‘reinvestigation’ by wiping out the earlier investigation report which was accepted by the Magistrate.

“ In the instant case it is not in dispute that after completion of investigation the respondent police submitted a report to the Jurisdictional Magistrate on 29.01.2003 and the same was accepted and proceeded against seven accused. Further it is not in dispute that at the first investigation the IO recorded the statement of one Dr. K. Jogigowda. It is not in dispute that based on the statement of this witness, the name of petitioner was excluded in the first charge sheet filed by the police. After a lapse of more than two years the respondent police again recorded the statement of this witness, Dr. K. Jogigowda for the second time and filed the additional charge sheet against the petitioner by wiping out the earlier statement of the witness. This act on the part of the respondent police amounts to reinvestigating the case. The Criminal Procedure Code do not provide for reinvestigation. Therefore the impugned order taking cognizance of additional charge sheet based on reinvestigation is liable to be set aside.”

(iii)        When investigation itself is illegal then the arrest is ex facie illegal.

(iv)        The Magistrate while sending Petitioners in Judicial remand in its order gave the reasons for rejecting the Police custody but passed a mechanical order of judicial remand without there being any offence pending and  without mentioning the reasons for judicial custody in such an illegal and vitiated ‘reinvestigation’.

(v)             Constitution Bench in the case of In Re: Madhu Limaye  (1969) 1 SCC 292, had ruled that in such cases the Court is bound to invoke the inherent powers under Habeas Corpus directing immediate release of the said person. There is no contrary judgment of larger Bench to overrule the said law. Therefore there is no discretion left to this Hon’ble Court except to pass  an order as directed by Hon’ble Constitution Bench.

7.     CONCLUDING PARAGRAPH: Hence it is humbly requested that, this Hon’ble court may pleased to record the following findings in the judgment;

i)             The reinvestigation and all proceedings initiated on the order of Home Minister is illegal and therefore the arrest is ex facie illegal;

ii)           The order of remand to judicial custody is not a reasoned order but a mechanical order and therefore as per law laid down by the constitution Bench judgment in Madhu Limaye’s case(supra) the court is bound to release the petitioner forthwith by invoking inherent jurisdiction of Writ of Habeas Corpus.

iii)          The submission of Ld. Sr. Counsel for State Mr. Amit Desai in opposing the release of petitioner on bail by defending the contemptuous and gross illegal act of the state, by making overruled submissions is gross misconduct and requires strict observations of this Hon’ble Court in the order as mandated by Hon’ble Supreme Court in the case of Lal Bahadur Gautam (2019) 6 SCC 441.

iv)         The conduct of officers of the state in justifying their gross and blatent contempt of law laid down by the Supreme court and this Hon’ble Court is aggravated contempt requiring suo motu action against them as laid down in the case of Re: M. P. Dwivedi AIR 1996 SC 2299.