Timing of sending letter by Jaganmohan Reddy is wrong but since letter  is subjudice before Chief Justice of India therefore it is not proper to comment.

Therefore, sending a complaint against Supreme Court Judges and publishing articles supporting  CM Jaganmohan Reddy's demand of investigation against Justice Ramanna is not found to be a contempt. 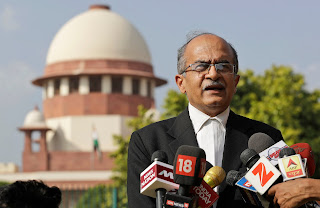 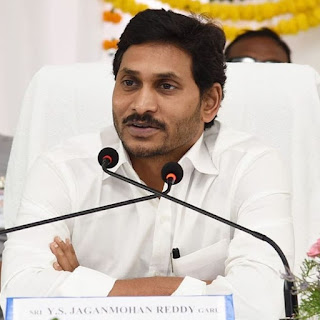 “ Having examined the tweets published by Sh. Prashant bhushan on his tweeter page and the statements attributed to Sh. Nilesh ojha, I do not find that the tweets or the statements warrant initiation of action for criminal contempt of the Supreme Court of India ” 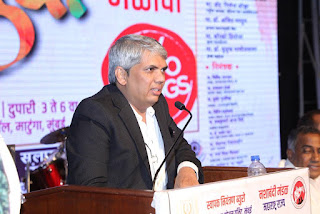 The Petition which is to be filed in the Supreme Court had made a grievance against the three as under;

i)       Shri Jaganmohan Reddy is guilty of contempt for sending the complaint as no one can send complaint against Supreme Court Judges in view of Re: Vijay Kurle’s case;

ii)    Adv. Nilesh Ojha, National President of ‘Indian Bar Association’ is also co accused as he published an article justifying the act of Jaganmohan Reddy saying that making complaint against judges of Supreme court is permissible as per ‘In –House –Procedure’ and making it public is for public good as per various judgments of the Supreme court. He also criticized the other members of Bar saying that when matter is subjudice before Hon’ble CJI then their request for contempt is showing servile nature as no investiuation is done in the complaint;

But said request is rejected by the Attorney General. 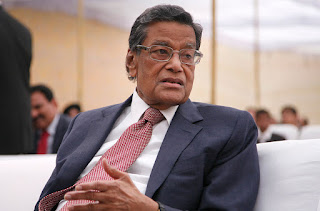 “   When a CM makes serious charges of corruption against a senior judge slated to become the next CJI to the present CJI, it needs a quick, independent & credible investigation, by 3 retired judges of the SC. No point in saying that CM is corrupt or that he should not make this public”

“ 7. The Respondent No. 3 Adv. Nilesh Ojha who is National President of Indian Bar Association, on 16.10.2020 had advocated the act of Respondent No. 1 in his article  saying that as per earlier judgments of the Supreme Court the Respondent no. 1 was justified in making complaint to the Chief Justice and it is in public interest that the truth should be published.

8. It is further view of Respondent No.3  in his article as under;

“The sum and substance of the above judgments is that;

i)                   When any person is having sound proofs then he is duty bound to bring it to the authority empowered to take action against such person. By making complaints Shri Y.S. Jaganmohan Reddy performed his constitutional duty as enschrigned in Art. 51(A) h of the constitution as ruled in the case of R.K. Jain (2010) 8 SCC 281

ii)                   Much harm is done by the myth that, merely by  taking the oath of office as a judge, a man ceases to be human and strips himself of all predilections, becomes a passionless thinking machine and he will not indulge in corrupt practices.[ Davinder Pal Singh Bhullar's case (2011) 14 SCC 770]

iii)              There are many cases where Judges of Supreme Court and High Courts are found to be involved in corruption and misused their position for giving undue favor to undeserving person and denying reliefs to the deserving one. Some are prosecuted and some managed to save them by doing further corruption.

iv)              There is no protection available to a judge of Supreme Court and High Court if he commits serious criminal offences by  misusing his position as a Judge.[ K. Veeraswami K. Veeraswami Vs. Union of India (1991) 3 SCC 655]

(a) the people with similar greviences may also be encouraged to come forward;

(b)  it will create deterrence in the mind of said corrupt judge;

(c)  further injustice and corruption of the said tainted Judge be stopped, prevented or at least the ‘coterie’ should be on backfoot (d) the vigilant citizens may give their proofs;

vii)            If a particular judge or magistrate is corrupt and sells justice, then a bona fide complaint to higher authorities to take necessary action against the delinquent judicial officer is also an act to maintain the purity of the administration of justice, for it is unthinkable that a judicial officer should be allowed to take bribes and if anybody makes a grievance of the matter to the higher authorities, he should be hauled up for contempt  of  Court. [Rama Surat Singh Vs. Shiv Kumar Pandey 1969 SCC OnLine All 226, Harihar Shukla 1976 Cr.L.J. 507, Ram Piarra comrade 1972 SCC OnLine P&H 277, Baradkanta Mishra  (1974) 1 SCC 374 ]

ix)              In such situations the members of the  Bar  are expected to adopt the judicial approach and insist for investigation and to bring the truth to the surface.   The members of the Bar will be failing in their  duties laid down  by Full Bench of Supreme Court in Maria Margarida Sequeria Fernandes and Ors v. Erasmo Jack de Sequeria,  AIR 2012 SC1727,  where it is ruled that in the administration of justice, Judges and Lawyers play equal roles. Like judges, lawyers also must ensure that truth triumphs in the administration of justice it must be the endeavor of all the Judges to ascertain truth in every matter and no stone should be left unturned in achieving this object.

xi)              The members of Bar  should avoid to make any comments which reflect their sycophant and servile conduct and people will feel that it is a sponsored act at the behest of corrupt/tainted Judges. The sycophancy of the members of the Bar will bring the name of Noble Profession in to disrepute.

xii)           The members of the Bar and anyone  who has filed contempt petition against Shri Jaganmohan Reddy and those who are  willing to prosecute him  under contempt without anything to counter the proofs given by Shri Jaganmohan, are guilty of judicial impropriety because the Hon’ble CJI is seized of the matter and if Hon’ble CJI don’t find it contemptuous then the other bench can not take cognizance of the contempt. [  Court on its Own Motion Vs. DSP Jayant Kashmiri 2017 SCC OnLine Del 7387]

xiv)         Such frivolous  petition  without any proof  if filed by anyone  be dismissed with heavy cost as ruled in R.K. Jain (2010) 8 SCC 281.Such members of Bar should also be expelled from the roll by the respective Bar Council. ”

“As per section-I of Chapter-II, part VI title “standards of professional conduct and etiquette” of the Bar Council India rules specifies the duties of an advocate that ‘he shall not be servile and whenever there is proper ground for serious complaint against Judicial officer, it shall be his right and duty to submit his grievance to proper authorities.”

The excerpts from  from  the book ‘The Law of  Contempt’ by LexisNexis Borrie & Lowe, are relevant here. It reads thus;

“The interest of an efficient judiciary call for a strong and  efficient bar, independent in outlook and not afraid to  respectfully and boldly present the controversy in question. A  sycophantic bar acting as an ‘Yes-man’ to the fulmination of an erring judge will only make the judge err more. A pampered judge will most likely stray away from the path of true justice. An opposite view strongly advanced by counsel helps the judge think over the pros and cons of a matter and come to a right decision. A weak bar is the greatest enemy to the administration of justice, Weak counsel to an overpowering judge is neither an asset to the profession nor to the interests of justice. In fact a weak and subservient counsel is the enemy of a judge’s personal progress. A seemingly hostile but robust advocate is the best benefactor to a judge who is ambitious of a bright carrier. The judge is gradually drawn to develop his intellectual poise and acumen, egged on as it were by combating counsel. A languishing bar is the surest sign of the decadence of the judiciary”

10. That all the above judgments relied by Respondent No. 3 are old laws and the law now made applicable is the law laid down in  Re: Vijay Kurle 2020 SCC OnLine 407. Where it is ruled as under;

“67. We also fail to understand how Shri Vijay Kurle who is a lawyer claims that it is his fundamental right to initiate criminal proceedings against Judges. Some members of the Bar cannot hold the judiciary to ransom by threatening Judges of initiating criminal action. ..”

11.  The act of respondent No. 2 and 3 is nothing but to instigate the common people and members of the Bar to lodge complaint against Judges of the Higher Judiciary. Terming it to be their right. Respondent no. 3 is going to propogate the wrong position of law.

No one is entitled to make a complaint of corruption against Judges. ”

However the above stand of the petitioner is not accepted by the Attorney General.