Prashant Bhushan placed reliance on wrong legal position and on per-incuriam judgment of smaller Bench in Re: Vijay Kurle’s case

The larger Full Bench view in in Raj Kishore Yadav 1997 (3) SCC 11, Bal Thackrey(2005) SCC 254 rules for dropping of contempt proceeding and show cause notice where suo motu cognizance  of the criminal contempt other than committed on the face of the court,  is taken (even in tagged/connected matters),  without first placing it before the Chief Justice. 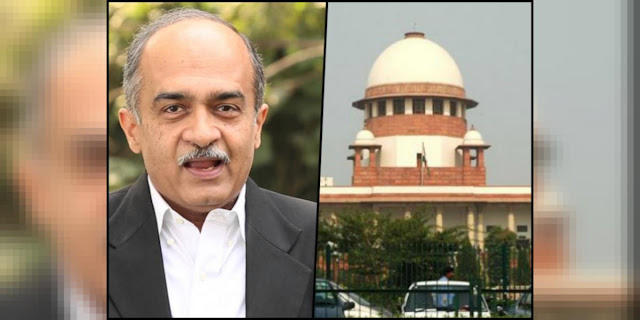 Supreme Court  in M. S. Mani (2001) 8 SCC 82  made it clear that the subsequent action does not cure the initial defect so as to convert the incompetent contempt motion into a maintainable one. Which is upheld by the Full Bench  in Bal Thackrey’s case.

Supreme Court can discharge Prashant Bhushan by  dropping  the contempt  proceedings against him  even though he has relied on per-incuriam judgment of Re: Vijay Kurle.

Therefter if court thinks it fit, subject to the principles of double jeopardy, can take fresh cognizance on the basis of averments in the reply affidavit as per J.R.Parashar’s case (2001) 6 SCC 735.

Prashant Bhushan’s fresh application filed in the Supreme Court on Thursday points to a procedural lacuna in the case, which was not discussed adequately during Wednesday’s hearing. In his new application, Bhushan pointed out the distinction between his first and second tweet.

The first tweet regarding the Chief Justice of India S. A. Bobde on a bike was posted on June 29, and was the subject of Mehak Maheshwari’s petition, which got converted into the suo motu contempt case.  Bhushan’s second tweet dated June 27  is regarding ‘destruction of democracy’ by last 4 CJIs which was, mysteriously published in the Times of India on the morning of July 22, based on which the Supreme Court-issued notice to Bhushan. Bhushan took objection for joint trial stating  that the second tweet constitutes a separate cause of action and that the court having taken cognizance of the second tweet is required to initiate it as a separate proceeding. Bhushan’s counsel, Dushyant Dave made this point orally during the hearing on Wednesday.

In his application, Bhushan took the objection  that the proceedings regarding the second tweet are required to be placed before the CJI who is the master of the roster for allocation of benches.

Maheshwari’s petition was placed before Justice N.V. Ramana, as the CJI, as master of the roster, could not have dealt with it administratively, because it concerned a tweet about him. Since no one can be a Judge in his own case. As second in seniority, Justice Ramana assigned the case to a Three Judge Bench of  Justice Arun Mishra.

Bhushan, while taking objection for cognizance of second tweet, has cited the Supreme Court’s judgment in Vijay Kurle 2020 SCC  On Line SC 407  . In this case, after taking cognizance and issuing notice to Kurle and others in a pending contempt matter against an advocate ,  bench of  Justice Rohinton Nariman  placed the matter before the CJI for allocation of the bench.

The observations of two Judge Bench in Re: Vijay Kurle that the Judge can take cognizance as per Art. 129 of the constitution without first placing the letter before CJI. It was further held by smaller bench that the law laid down in P.N. Duda's case are not binding to the Supreme Court. The said view is a wrong view and  is per incuriam as it is against the Full Bench judgment of Supreme Court in Rajiv Kishore (1997) & Constitution Benches  where it is ruled that while taking cognizance of any new case under contempt,  the provisions of  Art. 129 have no role but the law and practice of Chief Justice is the only Master of Roaster, has to be followed.

Adv. Prashant Bhushan has the Constitutional right to remain silent and not to file detailed reply till the conclusion of all stages in contempt procceding before final hearing and he can demolish the contempt case against him by cross-examining the witnesses. In Contempt proceedings the accused has the benefit of presumption of innocence and an opportunity of demolishing the prosecution case without exposing himself to cross-examination. [National Fertilizer Limited Vs. Tuncky (2013) 9 SCC 600,  Clough Engineering Ltd. (2009) 3 Mh. L.J. 553, Jai Chaitnya Das 2015 (3) AKR 627]

Mr. Bhushan can even call Justice Ramanna, former CJIs Gogoi, Khehar, Deepak Mishra etc. in to witness box to prove his allegations of bias and others. [Suo Motu Vs. Santy George 2020 SCC OnLine Ker 563, R. Vishwanathan Vs. Rukn AIR 1963 SC 1 [Relevant para is para 110] where Chief Justice and other two Judges were cross examined to prove bias, Murat Lal Vs. Emperor 1917 SCC OnLine Pat 1, Woodward Vs. Waterbury 155 A. 825 Judge of the Supreme court cross examined for his observation in order which were not supported by the material available on record.

Read the detail article in the PDF copy uploaded below.