Suo-moto cognizance by Justice C. Hari Shankar is against the rule

Suo-moto cognizance by Justice C. Hari Shankar is against the rule of ‘Chief Justice is the Master of Roaster.’

Secondly he cannot be a Judge in his own case and cannot take cognizance where he himself is a witness or party aggrieved. 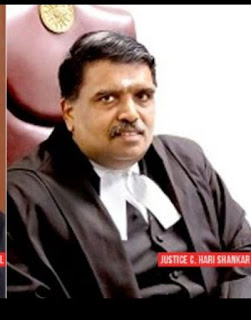 On 08.03.2021 Justice C. Hari Shankar had taken a suo moto cognizance of PIL regard the passenger not wearing mask properly in the flight ‘he was travelling.’ He issued notice to Director General of Civil Aviation.

The abovesaid order is vitiated on two grounds;

i) Only chief Justice is the Master of Roaster and no individual Judge can take cognizance of any case which is not assigned to the said Judge. The proper course for him is to place the matter before the Chief Justice and it is prerogative of the Chief Justice to decide as to cognizance should be taken or not. [Campaign For Judicial Accountability Vs. Union Of India (2018) 1 SCC 196, Divine Retreat Centre Vs. State of Kerala (2008) 3 SCC 542]

ii) The Judge Shri. C. Hari Shankar himself being the victim and witness cannot be a Judge and does not entitled to take cognizance in his own case. The order stand vitiated as coram-non-judice. [State of Punjab Vs. Davinder Pal Singh Bhullar (2011) 14 SCC 770]

1.      Chief justice is the master of the Roaster

1.1 Constitution Bench of Hon’ble Supreme Court in Campaign For Judicial Accountability And Reforms Vs. Union Of India (2018) 1 SCC 196 it is ruled as under;

‘‘10. The rules have been framed in that regard. True, the rules deal with reference, but the law laid down in Prakash Chand [State of Rajasthan v. Prakash Chand, (1998) 1 SCC 1] has to apply to the Supreme Court so that there will be smooth functioning of the Court and there is no chaos in the administration of justice dispensation system. If any such order has been passed by any Bench, that cannot hold the field as that will be running counter to the order passed by the Constitution Bench. Needless to say, no Judge can take up the matter on his own, unless allocated by the Chief Justice of India, as he is the Master of the Roster.’’

71. There is heavy duty cast upon the constitutional courts to protect themselves from the onslaught unleashed by unscrupulous litigants masquerading as public interest litigants. The individual Judges ought not to entertain communications and letters personally addressed to them and initiate action on the judicial side based on such communication so as to avoid embarrassment; that all communications and petitions invoking the jurisdiction of the Court must be addressed to the entire Court, that is to say, the Chief Justice and his companion Judges. The individual letters, if any, addressed to a particular Judge are required to be placed before the Chief Justice for consideration as to the proposed action on such petitions. Each Judge cannot decide for himself as to what communication should be entertained for setting the law in motion be it in PIL or in any jurisdiction.

77. Subject to the above directions the impugned order of the High Court is set aside. The appeal is accordingly allowed.

78. Since the question is one of general importance, we would direct that the copies of this judgment should be sent to the High Courts in all the States.’’

2.1 Recently former CJI Ranjan Gogoi though sitting in the Bench but refused to sign the judgment/order because the case was related with himself.

“2. … It ought to be realised that inherent powers do not confer an arbitrary jurisdiction on the High Court to act according to whim or caprice. That statutory power has to be exercised sparingly, with circumspection and in the rarest of rare cases.”

31. In CBI [(2006) 7 SCC 188 : (2006) 3 SCC (Cri) 233] this Court cautioned that the inherent power should not be exercised to stifle a legitimate prosecution and the High Court should refrain from giving a prima facie decision in a case where the entire facts are incomplete and hazy, more so when the evidence has not been collected and produced before the Court.

35. The allegations in the anonymous complaint are in two parts. The first part relates to Crime No. 381 of 2005 wherein it is alleged that investigation in crime has been “put to cold storage due to influence exerted at high places”. This is required to be considered along with the petition sent by the victim herself making certain allegations against the police in general. The allegations are against two police constables that they have tortured her mentally in connection with the investigation of the case. She complained that truth will never come out if the case is entrusted to the police for investigation. She prayed for a “confidential investigation”. Neither has the anonymous petition nor the complaint made by the victim been directed against the investigating officer complaining of any bias or any attempt on his part to destroy the available evidence.

The importance of roster

67. It is clear from the record that the learned Judge was not dealing with any public interest litigation cases as on the date of entertaining anonymous petition. It is beyond pale of any doubt and controversy that the administrative control of the High Court vests in the Chief Justice of the High Court alone and it is his prerogative to distribute business of the High Court, both judicial and administrative; that the Chief Justice is the master of the roster. He alone has the prerogative to constitute Benches of the Court and allocate cases to the Benches so constituted; and the puisne judges can only do that work as is allotted to them by the Chief Justice or under his directions; that the Puisne Judges cannot “pick and choose” any case pending in the High Court and assign the same to himself or themselves for disposal without appopriate orders of the Chief Justice. (See State of Rajasthan v. Prakash Chand [(1998) 1 SCC 1] .)69. In our view, the learned Judge ought not to have entertained the anonymous petition, contents of which remain unverified and made it basis for setting the law in motion as against the appellant as he was not entrusted with the judicial duty of disposing of PIL matters.70. Institution's own reputation is a priceless treasure. History teaches us that the independence of the judiciary is jeopardised when courts become embroiled in the passions of the day and assume primary responsibility to resolve the issues which are otherwise not entrusted to them by adopting procedures which are otherwise not known.”