Justice Nariman overrules the judgment of two Judge bench in his own case.

Justice Nariman overrules the judgment of two Judge bench in his own case.

Judgment in Re: Vijay Kurle’s case by the two Judge Bench is stand completely overruled by the Full Bench of the Supreme Court headed by Justice Rohinton Fali Nariman along with Justices Navin Sinha & K. M. Joseph on 1st March 2021 in the case of P. Mohanraj Vs. Shah Brothers  2021 SCC OnLine SC 152 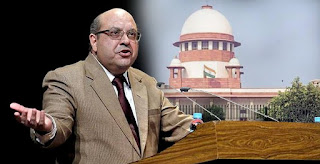 The full bench had clarified that the cognizance of the criminal contempt by the Supreme Court has to be taken in the manner provided by Section 15 of the Contempt of Courts Act, 1971. And the procedure that is to be followed after cognizance is taken, should be as per sec 17 of the Act.

This is also a clear  indication that the judgment in Prashant Bhushan’s case is not a good law and therefore not relied by the Full Bench. 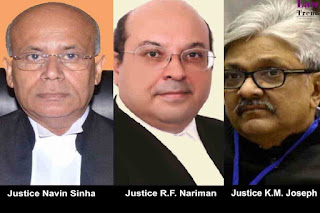 The cognizance of the contempt in Re: Vijay Kurle was taken by the Justice Nariman himself against the provisions of Sec. 15 of the Contempt of Courts Act,1971 and without following the guidelines given in P.N. Duda’s case.

In reply to the show cause notice all the respondents in Re: Vijay kurle’s case took specific objection and asked for discharge as per another full Bench judgment in Bal Thackre’s case (2005) 1 SCC 254, where it is clarified that such proceedings  should be dropped and respondents should be discharged.

Recently three Judge Bench in Re: Prashant Bhushan  2020 SCC OnLine SC 646, partly overruled the findings by the Bench  of Justice (Retd.) Deepak Gupta & Justice Aniruddha Bose by observing that the cognizance of the Criminal Contempt by the Supreme Court should only be as per the guidelines given in P.N. Duda's  Case (1988) 3 SCC 167 .

The Respondent’s counsel Adv. Ghanshyam Upadhyay, Adv. Partho Sarkar, Adv. Nilesh Ojha represented the case for the respondents. The historic thing in the case was that around 300 advocates  of Indian Bar Association  were present and 150  advocates of the Supreme Court marked their appearance in the case to oppose the illegality against the two advocates and one Human Right Activist.

The two Judge bench  headed by Justice (Retd.) Deepak Gupta having realised that there is no rebuttal to the arguments advanced on behalf of  all three respondents, refused to accept said arguments by stating that the provisions of Contempt of Courts Act 1971 and the guidelines given in P.N. Duda’s case are not binding on Supreme Court and as per Art. 129 of the constitution they can take cognizance without following any law or procedure and they can punish anyone at their will. There is no control over their power and the other provisions of contempt are not binding upon them.

They  illegally appointed  private counsel Mr. Siddharth Luthra as amicus Curiae in violation of Rule 10 of Supreme Court Rules for contempt. Said Rule 10 only permits the appointment of   Attorney General or Solicitor General. 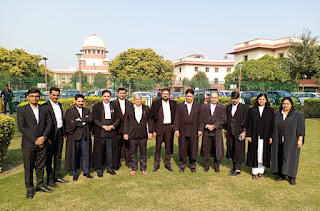 Renowned author and Sr. Counsel Sh. Asim Pandya in his article published on Live Law already explained as to how the judgment in Re: Vijay Kurle & in Re: Prashant Bhushan are no longer good law.

In his article dated 16.09.2020 titled as ‘Arrogation Of Unlimited Contempt Power By The Supreme Court- A Hornets' Nest Stirred Up Again’ he strongly criticized the conduct of Justice Aniruddha Bose and Deepak Gupta in acting against judicial propriety.

Many Benches  are not relying on the ratio laid down in the judgment of  Re: Vijay Kurle’s case and Re: Prashant Bhushan’s case  as they are ex facie not laying down the correct proposition of law.

The Full Bench vide its judgment dated 01.03.2021 in P. Mohanraj Vs. Shah Brothers Ispat Pvt. Ltd. 2021 SCC OnLine SC 152  also did not followed the ratio laid down in Re: Vijay Kurle’s case and Re: Prashant Bhushan’s case as it is not the correct law. The full Bench  in fact followed the judgment in Sahdeo’s case and in the case of  All India Anna Dravida Munnetra Kazhagam ( 2009) 5 SCC 417 where it is ruled that the proceedings of  Criminal Contempt is between Contemnor and  Court or  State. The alleged contemnor is to be informed as to what is the charge he has to meet. The law is made clear that Specific charge has to be framed in precision.  Charges have to be proved beyond reasonable doubt and the alleged contemnor becomes entitled to the benefit of doubt. Burden and standard of proof in contempt proceedings, being quasi-criminal in nature, is the standard of proof required in criminal proceedings, for the reason that contempt proceedings are quasi-criminal in nature. It would be very hazardous to impose sentence in contempt proceedings on some probabilities

Earlier  Justice Arun Mishra’s Bench partly relied on the ratio in Re: vijay Kurle Case, that the provisions of Contempt of Courts Act, 1971 are not applicable to the Supreme Court.

The part reliance on the judgment  of  Re: Vijay Kurle’s judgment of smaller bench  by the Justice Arun Mishra are per-incuriam and anticipatorily overruled because it is against the earlier binding precedents of the Constitution Bench of the Supreme Court in;

Two review petitions filed by Adv. Prashant Bhushan are pending. The three Judge bench headed by Justice A.M.Khanwilkar had passed the order on 16.12.2020  that the review petitions should be heard after the decision in writ Petition.

Many of the Benches are not relying on the judgment in Re: Vijay Kurle’s case as being no longer good law.

The bench Justice (Retd.) Deepak Gupta refused to grant opportunity to lead the evidence and cross examine the witnesses and convicted the respondents by ignoring evidence on the basis of probabilities that the respondent  may have committed. The respondents were sentenced in the absence of their counsel and themselves. While the other bench headed by justice Uday Lalit in the case of Dr. Vijay Mallya had adjourned the hearing on sentence under contempt since last one year.

72. In criminal contempt cases, “cognizance” in contempts other than those referred to in Section 14 of the Act is taken by the Supreme Court or the High Court in the manner provided by Section 15. Section 17 then lays down the procedure that is to be followed after cognizance is taken. Finally, by Section 23, the Supreme Court and the High Courts are given the power to make rules, not inconsistent with the provisions of the Act, providing for any matter relating to its procedure.

“15. The proceedings of contempt are quasi-criminal in nature. In a case where the order passed by the court is not complied with by mistake, inadvertence or by misunderstanding of the meaning and purport of the order, unless it is intentional, no charge of contempt can be brought home. There may possibly be a case where disobedience is accidental. If that is so, there would be no contempt. [Vide B.K. Kar v. Chief Justice and Justices of the Orissa High Court [AIR 1961 SC 1367 : (1961) 2 Cri LJ 438] (AIR p. 1370, para 7).]

18. In Sukhdev Singh v. Teja Singh [AIR 1954 SC 186 : 1954 Cri LJ 460] this Court placing reliance upon the judgment of the Privy Council in Andre Paul Terence Ambard v. Attorney General of Trinidad and Tabago [AIR 1936 PC 141], held that the proceedings under the Contempt of Courts Act are quasi-criminal in nature and orders passed in those proceedings are to be treated as orders passed in criminal cases.

27. In view of the above, the law can be summarised that the High Court has a power to initiate the contempt proceedings suo motu for ensuring the compliance with the orders passed by the Court. However, contempt proceedings being quasi-criminal in nature, the same standard of proof is required in the same manner as in other criminal cases. The alleged contemnor is entitled to the protection of all safeguards/rights which are provided in the criminal jurisprudence, including the benefit of doubt. There must be a clear-cut case of obstruction of administration of justice by a party intentionally to bring the matter within the ambit of the said provision. The alleged contemnor is to be informed as to what is the charge, he has to meet. Thus, specific charge has to be framed in precision. The alleged contemnor may ask the Court to permit him to cross-examine the witnesses i.e. the deponents of affidavits, who have deposed against him. In spite of the fact that contempt proceedings are quasi-criminal in nature, provisions of the Code of Criminal Procedure, 1973 (hereinafter called “CrPC”) and the Evidence Act are not attracted for the reason that proceedings have to be concluded expeditiously. Thus, the trial has to be concluded as early as possible. The case should not rest only on surmises and conjectures. There must be clear and reliable evidence to substantiate the allegations against the alleged contemnor. The proceedings must be concluded giving strict adherence to the statutory rules framed for the purpose.”

For more details of illegality committed by Justice (retd.) Deepak Gupta and Justice Aniruddha Bose please visit my blog titled as “When the Supreme Court Judge having a duty to protect the Rights of the people, himself violates their Rights and defies the Constitution”.