The judgment in KVR Industries Pvt. Ltd. Vs. P.P. Bafna 2020 Scc Online NCLAT 828 is against the law laid down by the Supreme Court 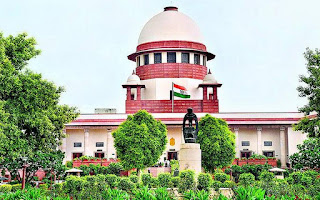 FOR DETAILS  ABOUT LAW ON PERJURY AND SPECIALLY REGARDING PROVISIONS OF SEC 340 OF CR. P.C. READERS CAN DOWNLOAD THE BOOK OF 'LAW ON PERJURY -2021' WRITTEN BY ADV. NILESH OJHA FROM WEBSITE OF INDIAN BAR ASSOCIATION WHICH IS BEING LAUNCHED VERY SOON.

The Corporate Debtor had filed I.A. No. 51 and 52 of 2020 mentioned above seeking to initiate Criminal Proceedings against Mr. Praful Prakash Bafna, the authorized signatory of Financial Creditor under Section 340 read with Section 195(1)(b)(i) of Cr. P.C. read with Section 193 of Penal Code, 1860 (Penal Code in short), after conducting preliminary inquiry and to call Mr. Praful Prakash Bafna for cross-examination. The Corporate Debtor claimed that the signatures on I.A. Nos. 41 and 42 of 2020 by which Applications Financial Creditor sought restoration of Company Petition and restoration of Interim Orders passed earlier in the Company Petition C.P. (I.B) No. 204/7/AMR/2019 (CP/204/2019 in short) were forged.

However the adjudicating authority of NCLT disposed the I.A. Nos. 51 and 52 of 2020 with observations that the Corporate Debtor may approach appropriate forum for redressal. Said order was challenged before NCLAT.

The NCLAT Bench of Justice A.I.S Cheema and V.P. Singh had refused to proceed with the enquiry under Sec. 340 of Cr. P. C. on the following grounds;

i) If it is not shown the exact benefit/advantage taken/being taken by the accused due to forging the signature then action under Sec. 340 of Cr. P. C. is not called for.

ii) The appellant/Corporate Debtor has not prima-facie shown any intention or mens rea on the part of the accused i.e. financial creditor.

iii) The defence of accused is having substance that he will not have any advantage of benefit of putting false signature.

GROSS ILLEGALITIES IN THE JUDGMENT

1.      The said judgment is passed by taking the defence of the accused in to consideration and therefore it is vitiated in view of law laid down in following binding precedents;

1.1.   In above precedents it is ruled that during hearing an application under Sec. 340 of Cr. P. C. the accused will not have any say or right to participate either before lower Court or before Appellate/Revisional Court. The order/judgment  passed by taking the defence of prospective accused in to consideration is illegal and vitiated.

1.2.   The provision for Appeal against order by sub ordinate bench is given in sec 341 of Cr. P.C. and it is a special section where the Appellate Bench can exercise the same power as that of sub ordinate bench and therefore the prospective accused cannot be made respondent nor he is allowed to participate in the Appeal. Even if he appears then also his defence cannot be taken in to consideration.

1.2. The observation of the NCLAT Bench that,  since the Appellant failed to show as to what advantage/benefit the accused are going to take from the said act of forging the signature therefore it cannot be treated as an offence against administration of justice are also wrong and against the binding precedents of Hon’ble Supreme Court in following landmark judgments;

2.1.   In Radhey Shyan Garg Vs. Naresh Kumar Gupta (2009) 13 SCC 201 Hon’ble Supreme Court had directed the prosecution on the ground of mismatch of signatures. It is ruled as under;

“22. …. However, keeping in view the fact that there appears to be an apparent dissimilarity in the signatures of the deponent appearing at pp. 39 and 61, we are of the opinion that there exists a necessity for conducting an enquiry in this behalf. We, therefore, direct the Registrar (Judicial) to conduct an enquiry in terms of Section 340 of the Code of Criminal Procedure and submit a report to this Court. We, however, make it clear that trial of the matter shall go on before the court below.”

3.      Hence it is clear that the judgment of NCLAT is per-incuriam.

4.      RELEVANT PARAS FROM THE BINDING PRECEDENTS PROVING ILLEGALITY OF THE JUDGMENT BY NCLAT.

“  False affidavit – Whether the respondent has obtained a definite advantage of this false statement or not,  is wholly immaterial in the matter of commission of offence –

-the respondents cannot escape the liability of being held guilty of contempt by reason of a definite and deliberate false statement. The statement on oath is a fabricated one and contrary to the facts -  The fact that the deponent has in fact affirmed a false affidavit before this Court is rather serious in nature and thereby rendered himself guilty of contempt of this Court as noticed hereinbefore. This Court in our view, would be failing in its duties, if the matter in question is not dealt with in a manner proper and effective for maintenance of magesty of Courts as otherwise the Law Courts would lose its efficacy to the litigant public. It is in this perspective that we do feel it expedient to record that by mere tendering of unconditional apology to this Court would not exonerate the contemnor in the contextual facts but having regard to the nature of the act of contempt, we do deem it fit to impose a fine of Rs. 2,500 each so as to sub-serve the ends of justice against the respondent-contemnors in default of payment of which they (each of them) will suffer simple imprisonment for one month.

“ The fact of the matter is that a false or misleading statement was made before this Court and that by itself is enough to invite an adverse reaction.

“A] The accused does not have any say in the process of accepting the application u/s 340 of Cr.P.C or directing the preliminary inquiry.

“Court cannot draw conclusion about falsity of complaint on the basis of submission of ACCUSED. (Para No. 6)”

“Criminal P.C.(1973),Ss.202,204- Issue of process –Magistrate cannot issue notice to proposed accused as to why process be not issued against him for the alleged offences.

The learned Magistrate could not have evolved new procedure which is not contemplated by law. The accused has no locus standi in the matter before issuing process against him and therefore, he is not entitled to be heard before process is issued against him. The learned Magistrate has to consider the question of issuing process purely from the point of view of the complainant without reference to any defence that the accused may have. At the stage of issuing, the Magistrate cannot enter into a detailed discussion on the merits or demerits of the case.”

5.3. In Ashok Mootilal Saraogi Vs. State it is ruled as under;

Court ordering, registration of FIR – Opportunity of hearing to accused need not be given prior to ordering prosecution (Para No. 4)”